The Ray White Drury sales team is particularly interested in the progress of the private plan change requests that have been submitted over the past year, regarding the rezoning of future urban land in
and around Drury. Chris Caldwell and Andrew Fisher from Ray White Drury attended the first round of hearings on Plan Change 48 submitted by Kiwi Properties Ltd regarding a proposed Drury Centre Precinct.

The aim of this was to fully familiarise themselves as agents with developments in the area.

The hearings in front of a panel of independent commissioners allowed Kiwi Properties to present
their case, and then parties opposed to the plan change, or requesting amendments to the plan
change, put forward their arguments.
The last day of the hearings saw a detailed presentation by a number of departments within
Auckland Council, opposing the change.

Auckland Council is opposing the change on the grounds that it does not have funds to allow delivery
of required infrastructure and in particular roading. To make matters worse for the council the
government has withdrawn funds from several roading projects.

There is to be a further hearing regarding the plan change in November and the roading issues will
be addressed at the second hearing.

Encompassing 95 Hectares of currently future urban zoned land, bordered by Waihoehoe Road,
Fitzgerald Road, Brookfield Road, and Flanagan Road, the plan change is aimed to update the zoning
to allow development of a combination of metro centre, big box retail and Business Mixed Use
areas, comprising smaller retail, commercial and residential land use.
Kiwi Properties maintains the zoning will allow for the construction of 3000 dwellings and the
creation of up to 6000 jobs.

A key Auckland Council argument is that a zoning change was scheduled in their land release
strategy, but not until the 2028 – 2032 period. Uncoupling this piece of land from that strategy,
fragments their strategic plan for the area.
The plan change is tightly coupled with the development of a proposed Drury Train Station and park
and ride, due for completion in 2025. A zoning change would allow parts of the area for
development to run parallel with this.

Though no government green light has been given, it is proposed that the Rail Station is consented
under the COVID-19 Recovery Act. A decision on applying the Act to the development is expected in
a couple of weeks.
One major effect of the construction of the railway station and park and ride would entail removal of
Flanagan Road.

The plan change seeks to allow buildings up to 72 metres (about 20 storeys) in close to the railway
station with lower limits as the distance from the railway station increased. It is envisaged that there
is an intensive urban-type development at the core of the area including commercial and residential
developments, with big box retail, and less intensive retail on the fringes.

It is proposed that Drury should become a major commercial centre for the region, as it brings
together access roading (both motorway and arterial) and rail. Being a green fields site allows an

efficient union of urban, suburban and retail precincts. It will be surrounded by a good amount of
relatively intensive residential building.
The plan change document, as is required, covered a range of environmental, infrastructure and
community aspects of the change.

In general parties were in agreement that the change should proceed with Auckland Council in
opposition recommending that the plan change be declined.

We will be attending the Plan Change 49 (Fulton Hogan) and 50 (Oyster Capital) hearings over then
coming weeks, as well as the November hearings for all three applications – so we will keep you all
thoroughly informed! 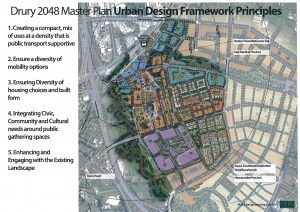