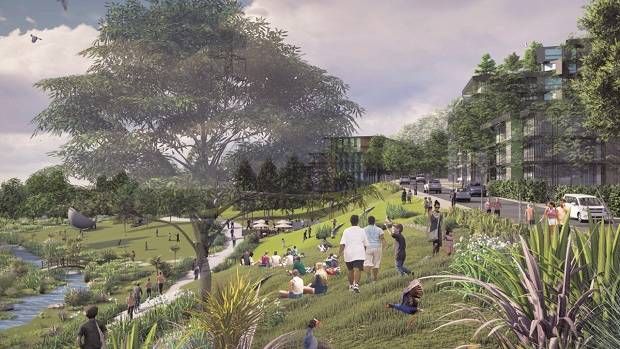 Publicly-listed Kiwi Property is in the final stages of obtaining planning permission to build a modern, urban-designed town centre on rural land at Drury East.

Kiwi Property, which owns the Sylvia Park Lifestyle centre further up the motorway, will be making an application for a private plan change to Auckland Council this year, and after public notification it hopes to begin construction on its 51ha site by 2023/24. “Seldom do you get the opportunity to develop a whole new town, and this gives us a chance to create something that will last for tens if not hundreds of years,” says Clive Mackenzie, chief executive of Kiwi Property. “A lot of things have changed in the last 20 years around sustainability, walkability, access to public transport, and all these are really critical ingredients. We will be incorporating them all in the town centre as we go forward.” Kiwi Property is planning about 58,00sq m of office and 119,000sq m of retail space at Drury East — Sylvia Park has a retail floor area of 71,000sq m and more than 200 stores. 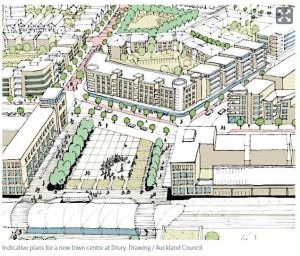 The Drury East centre will include 10ha of public space with a library, civic square and segregated cycleways connecting to arterial roads and shared paths. There is provision for three new schools — two primary and one secondary — and talk of a new regional hospital in the Drury area. Surrounding the Drury East town centre will be 7000 homes, housing 19,000 residents, developed by a partnership of Oyster Capital and Fletcher Building. Just south, Stevenson Group is developing an 180ha industrial park that will attract about 6000 new jobs, a smaller commercial centre and 850 houses built by Classic Builders. Heading west towards Manukau Harbour’s Pahurehure Inlet and land developer Charles Ma and his Made Group is establishing the Auranga subdivision of up to 2500 homes. “We like residential on our boundary because it brings families, it brings excitement, it brings people using the roads and train stations and people populating the shops,” Mackenzie says. “We have played the high-rise office building and shopping centre markets, but over the last two to three years the company has been focused on shifting away from traditional shopping centres to what is called mixed-use.”

He says Drury East gives Kiwi Property the opportunity for mixed-use development — to integrate uses such as office, retail, residential and medical, whether it’s built to sell or rent.  Fulton Hogan, which bought the nearby Drury Quarry from Stevenson nearly two years ago, is clearing the land and building new roading and other infrastructure. The quarry provides ready-made aggregate which doesn’t need to be transported far. Drury East will also connect with two new railway stations and a bus interchange with frequent routes along Great South Rd – these projects were announced in the Government’s New Zealand Transport Upgrade programme. Drury had a railway station as early as 1874 and was upgraded in 1918, but finally closed in 1972. The sleepy Drury village and its wider area is set to be transformed into a fully-functioning city within a city as the council and developers in the Auckland region push hard to cater for an expected increase in population of more than 700,000 to 2.4 million within 30 years. The Council, agencies, planners, designers and developers have learned to sit around the table together to form integrated structure plans.  “One of the things that has been remarkable on the development is not just ourselves but Fulton Hogan, Stevenson, Oyster and Charles Ma — there’s a huge amount of alignment about the vision for Drury,” says Mackenzie.

“What normally happens is that there’s always a big scrap among developers but in this case everyone is on the same page. The master plan (developed by Auckland-based Civitas) and the structure plan that’s falling into place is really starting to show that everybody is working towards the same goal and vision. “You’ve also got NZ Transport Agency, KiwiRail, Auckland Transport and council in the room, and unless you surround the table you never get that true alignment. And of course the local community needs to be involved in the process,” he says. “This is a unique development. Drury East is a private sector, central and local government, and community solution. The stars are getting aligned and everybody sees it as a huge opportunity for Auckland — and the Waikato to be honest — because it bridges the two areas.”

Mackenzie says the town centre is not just for local residents but for a broader community. “You already have an existing community that is forced to commute into Manukau and Auckland city because there’s no amenity for them. So by putting that amenity in Drury East people don’t have to commute.” Kiwi Property, Oyster and Fulton Hogan have worked together to submit their plan changes at the same time so it wasn’t a fragmented development. “It’s not like a road suddenly finishes in a dead-end — it’s all been meshed together,” says Mackenzie. “Somebody buys a house a kilometre away and they will be able to walk to the town centre. It’s all been laid out with open spaces and connections so they can do this. “The collaboration (among the developers) has been successful but there are still things we are debating with council.  “The positioning of the train stations to face the town centre is critical for us.”You want people to get off the train and walk straight into town. You don’t want them having to go on a hike — especially if you are trying to integrate it with a future regional hospital.”

Mackenzie says Kiwi Property is looking at achieving a green-star standard for Drury East. “Drury has a very green nature and we are working through what a green-star rating would look like. “There are leads with green-star communities in the United States and Britain, and we are fully onboard with making sure Drury East is environmentally friendly and sustainable.” He said Kiwi Property was the second biggest user of solar energy at its sites and since 2012 it has reduced its carbon emissions by 40 per cent. “We are fully committed in that space and continue to invest heavily in it.” 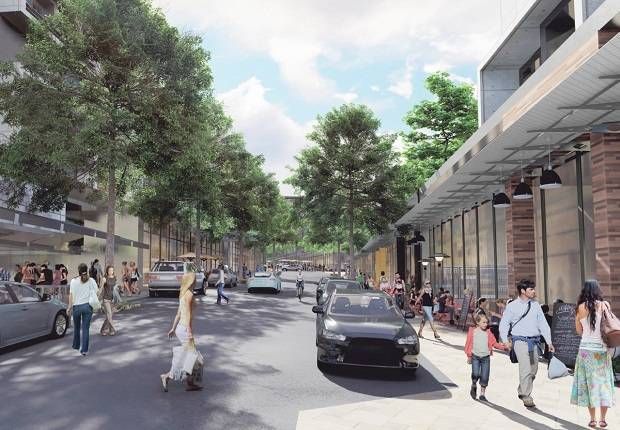 Kiwi Property has a portfolio worth $3.2 billion and includes shopping centres Sylvia Park, Westgate Lifestyle, Lynn Mall (New Zealand’s first), The Plaza in Palmerston North, Northlands in Christchurch, Centre Place North and a joint venture with Tainui Group Holdings in The Base in Hamilton. Amongst its office buildings are the Vero Centre and ASB North Wharf in Auckland. David Schwartfeger, development manager for Kiwi Property, says Drury is a fantastic inter-generational project to create a lot of jobs and community opportunities, and it’s great to have such a strong advocate in the Government putting in big infrastructure investment and driving it forward. “We’ve had community days and the locals have been positive. It’s been such a long time and they have a good understanding that ‘hey, it’s coming’.

“They are really looking forward to the train stations in terms of sorting out the commute, and having stuff like retail in place so they don’t have to drive. “At present if you want to go to the supermarket, you are driving into Papakura or taking a long trip to Pukekohe,” Schwartfeger says. Mackenzie says “you are never going to keep everybody happy but we want to take everyone on the journey. “Through the feedback we’ve received there’s a lot of history in the area, and we will honour that.  “On the land is the original homestead which is more than a 100 years old and we will be retaining it as a focal point for the town centre and local community.

“We will be doing these sorts of things,” he says. 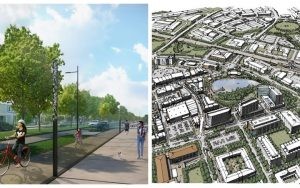