NZ’s housing market continues apace despite summer holidays
Despite most New Zealanders taking a summer holiday in January, the housing market was busier
and more buoyant than we would usually see at this time of the year, according to the latest data
from the Real Estate Institute of New Zealand (REINZ), source of the most complete and accurate
real estate data in New Zealand.
Median house prices across New Zealand increased by 19.3% from $612,000 in January 2020 to
$730,300 in January 2021. While median prices were down marginally from December, house prices
held up better than we would normally expect when moving from December to January as indicated
by REINZ’s seasonally adjusted median pricing data which showed a 2.0% lift.
Median house prices for New Zealand excluding Auckland increased by 14.7% from $525,000 in
January last year to $602,000.
Auckland’s median house price increased by 14.9% from $870,000 at the same time last year to
$1,000,000.

Bindi Norwell, Chief Executive at REINZ says: “Usually, in January the residential property market
slows down, and prices ease off a bit as people head to the beach for their summer holidays.
However, the first month of 2021 was anything but normal, as house prices across the country have
continued to rise with January seeing four regions reach new record median prices and one region
equal its December record. Furthermore, 27 districts around the country reached new record high
median prices, with 13 of those districts exceeding last month’s record.

“Additionally, the fear of future price rises and the fear of missing out lingers deep in buyers’ minds
and is impacting people’s buying behaviour as January saw a continuation of properties selling at a
rapid pace. Last month, residential properties sold at their fastest pace for a January month in 17
years, carrying on the pattern we’ve seen over the past few months and therefore continuing to
impact pricing.

“The Auckland market saw a slight cooling off in prices when compared to the record high we saw in
December 2020, which is what we would expect at this time of the year. Interestingly, when we look
at the data from a seasonally adjusted perspective, house prices were actually higher than we would
normally expect at this time of the year (+1.7%). North Shore City ($1,255,000) and Rodney District
($1,100,000) again reached new record median prices showing how there is still strong competition
for good properties in the region and how affordability continues to be an issue,” points out Norwell.
January’s sales volumes highest for month of January in 5 years

For the full REINZ Monthly Property Reports please click on the following images; 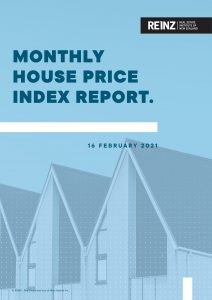 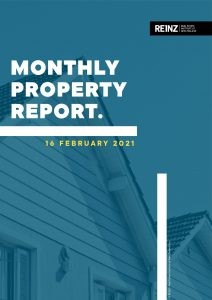 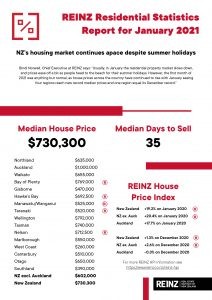