Lack of properties for sale is putting pressure on house prices & speeding up sales, says REINZ

As the total pool of properties available for sale in New Zealand falls to record lows, this is
continuing to put pressure on house prices, with the country seeing a new record median house
price for the fourth month in a row according to the latest data from the Real Estate Institute of New
Zealand (REINZ), source of the most complete and accurate real estate data in New Zealand.
Median house prices across New Zealand increased by 19.3% from $628,000 in December 2019 to a
new record median price of $749,000 in December 2020.

Bindi Norwell, Chief Executive at REINZ says: “For the fourth month in a row, New Zealand has seen
house prices reach a new record; with December seeing a new national median house price of
$749,000. Additionally, 11 regions and 27 districts saw record high median prices – a continuation of
the pattern we’ve seen in the housing market for the last few months – highlighting how strong the
residential housing market is in all parts of the country.

“Currently we have half the inventory levels we had back in December 2018. Therefore, there just
isn’t enough choice for people looking to purchase which has meant that there is significant pressure
being placed on house prices in most parts of the country. When you add into the equation the fact
that there are record low interest rates, it means that people are more willing to compete to secure
the property they want,” continues Norwell. 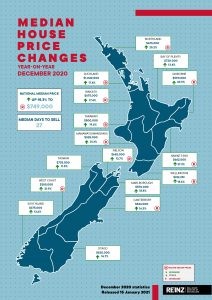 “This lack of choice and high levels of confidence is also causing properties to be sold at the quickest
pace we’ve seen in 17 years. The median number of days to sell a house is now just 27 days, showing
how people are moving quickly to secure ‘good’ properties,” she points out.

“Auckland City remains New Zealand’s most expensive district in the country with December seeing
the City reach a new record median house price of $1,280,000 – hovering extremely close to the
$1.3 million mark. Not far behind, was North Shore City on $1,235,000 and Rodney District on
$1,005,000 showing how unaffordable the Auckland region is becoming – especially for first home
buyers. The only district in Auckland now with a median under the $800,000 mark is Franklin District
with a median of $790,000;while it might be the most ‘affordable’ area in Auckland, it does mean a
significant commute to the city for those looking to purchase there,” she continues.

For New Zealand excluding Auckland, the number of properties sold increased by 24.2% when
compared to the same time last year (from 4,604 to 5,716).
In Auckland, the number of properties sold in December increased by 66.0% year-on-year (from
1,939 to 3,219) – the highest for the month of December since records began.
In addition to Auckland, regions with the largest increase in annual sales volumes during December
were:

“If 2020 taught us anything, it was that the unusual can happen. Looking at December’s sales data
again proves this point, as we saw the highest number of properties sold in a December month since
REINZ began keeping records,” says Norwell.
“December 2020 saw 8,935 properties sold which is 2,392 more houses than the same time last
year. That’s an additional 77 properties sold every single day in December, which is a pretty
remarkable result and shows what a strong position the property market finished 2020 in,”
continues Norwell.
“Again, the Auckland market has seen the largest percentage increase in sales volumes when
compared to the same time last year, and December marked the fourth consecutive month where
the annual change in sales volume increases exceeded the 50% mark. Looking at the seasonally
adjusted figures for annual sales volumes for Auckland confirms that this was an exceptional
month,” points out Norwell.
“Similar to what we’ve seen in the past few months, with market confidence high, buyers are likely
to be keen to purchase ahead of further anticipated price rises and the re-introduction of the LVRs.
Therefore, we would expect that the housing market will be busy for the next few months. However,
if we don’t see more stock come to the market, we may start to see this impact sales volumes going
forward,” concludes Norwell. 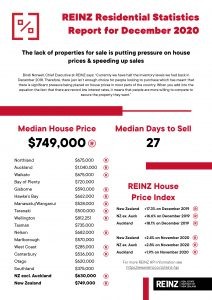 The REINZ House Price Index (HPI) for New Zealand, which measures the changing value of property
in the market, increased 17.3% year-on-year to 3,417 a new high on the index – the highest annual
percentage increase in 63 months (September 2015).
Additionally, 11 out of 12 regions had double-digit annual growth figures – the first time in 15 years
the index has been this strong.
The HPI for New Zealand excluding Auckland showed house price values increased 16.6% from
December 2019 to 3,385 a new high for December 2020.
Auckland’s house price values increased 18.1% year-on-year to 3,457 also a new high for the index
and the largest annual percentage increase we’ve seen for the region in 61 months (November
2015).

The total number of properties available for sale in New Zealand decreased by -29.1% in December
to 12,932 – the lowest level of inventory ever. This was down from 18,230 in December 2019 – a
decrease of 5,298 properties compared to 12 months ago. Additionally, every region – except
Auckland and Gisborne – had their lowest levels of inventory ever. 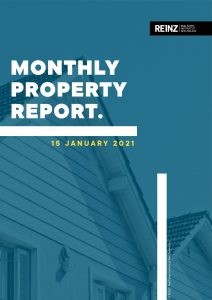 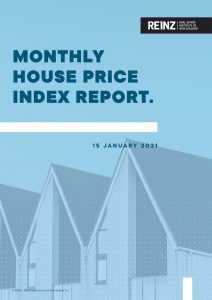