Median house prices across New Zealand increased by 16.4% in August to $675,000, up from $580,000 in August 2019 and up from $659,000 in July (a 2.4% lift) and every region in the country saw an annual increase in median house prices, according to the latest data from the Real Estate Institute of New Zealand (REINZ), source of the most complete and accurate real estate data in New Zealand.

Over and above Auckland, 7 regions saw record median prices during August:

Bindi Norwell, Chief Executive at REINZ says: “For the last few weeks we’ve been hearing reports from around the country of vendors achieving good prices for the sale of their homes; but we would never have guessed that 8 regions and 17 Districts/Cities across the country would see record median prices just 4 months after the entire country was in lockdown. The housing market’s recovery post-lockdown over the last few months has been astonishing and has certainly surpassed many predictions.

“August saw record median prices in Rotorua District ($510,000), Tauranga City ($745,000), Lower Hutt City ($670,000), Upper Hutt City ($663,200), Papakura District ($775,000), Rodney District ($961,000) and Waitakere City ($890,000),” continues Norwell. “At this point last year, the Hawke’s Bay region had not had a median price over the $500,000 mark and now the region is extremely close to exceeding the $600,000 median mark. It’s a similar picture in Otago, where the region had only seen one month with a median price over the $500,000 mark and now, it’s closer to the $600,000 mark than the $500,000 mark,” she continues. “The combination of low interest rates, the removal of LVRs, the lack of listings, people’s aspiration to have more space/a bigger backyard, catch up post lockdown and first time buyers’ desire to get onto the market have all contributed to the uplift in prices we’ve seen over the last few months. Unless we see more listings come to the market before Christmas, we may start to see additional pressure on house prices and affordability,” points out Norwell.

Most properties sold in the month of August for 5 years

For New Zealand excluding Auckland, the number of properties sold increased by 16.7% when compared to the same time last year (from 4,320 to 5,040) – the highest for the month of August in 4 years.

Regions outside Auckland with the largest increase in annual sales volumes during August were:

There were also four regions that saw an annual decrease in sales volumes:

“For many parts of the country, August was an extremely busy month sales volume wise, with the highest number of properties sold for the month of August in five years bolstered by an uplift in sales volumes in Auckland, Nelson, Southland and Hawke’s Bay. Overall, there were 1,520 more residential properties sold this August than last August which equates to an additional 49 properties sold a day which is pretty incredible,” says Norwell. “The Level 3 ‘lockdown’ imposed on Auckland from 12-30 August had little impact on sales volumes, with last month seeing the highest number of properties sold in an August month for 5 years showing how the adoption of digital tools has been a key factor in keeping the property market moving as we moved back up the Alert Level system,” she continues.  “Unlike median prices where every region saw an uplift, there were a few regions that saw annual decreases in sales volumes. Of note, is the Gisborne region which has seen annual falls in sales volumes for the last couple of months now, showing how the listing shortage is really starting to be felt in the region,” continues Norwell. “It will be interesting to see what happens now that we’re heading into spring, as traditionally sales volumes start to lift as the weather warms up. As we’ve already seen, 2020 seems to be defying all predictions and going against all norms at this point in time. However, the full impact of COVID-19 may not have been realised yet, particularly in relation to unemployment and the economy,” she continues.

The REINZ House Price Index for New Zealand, which measures the changing value of property in the market, increased 10.0% year-on-year to 3,072 a new high.

The 3 month data for New Zealand showed an uplift of 4.6% the highest percentage increase in 49 months despite the impact of COVID-19.

Days to sell lowest for an August month in 4 years

In August, the median number of days to sell a property nationally decreased 5 days from 39 to 34 when compared to August 2019, the lowest for the month of August in 4 years, and the same figure as July this year.

For New Zealand excluding Auckland, the median days to sell decreased by 4 days from 37 to 33, the lowest for the month of August in 4 years, and the same figure as July this year.

Auckland saw the median number of days to sell a property decrease by 9 days from 44 to 35 year-on-year, the lowest for the month of August in 4 years.

The West Coast again had the highest days to sell for the country at 78 days, down 16 days on last year’s figure.

“To have all but two regions with a median number of days to sell below the 40 mark in an August month is not something we would expect to see at this time of year, however, the insatiable appetite for property is driving this. We just hope that people are taking their time to undertake the appropriate due diligence before purchasing a property,” continues Norwell.

Auctions were used in 16.1% of all sales across the country in August, with 1,232 properties selling under the hammer – up from 10.6% at the same time last year, when 650 properties were sold via auction. This was the highest percentage of auctions for the month of August in 4 years.

In third place was Bay of Plenty with 17.5% (90 properties) sold under the hammer up from 13.2% in August 2019 (63 properties). This was the highest percentage of auctions for the month of August in 3 years.

The total number of properties available for sale nationally decreased by -13.2% in August to 17,974 down from 20,712 in August 2019 – a decrease of 2,738 properties compared to 12 months ago and the lowest level of total inventory since records began.

Regions with the largest percentage decrease in total inventory levels were:

Wellington had the lowest number of weeks’ inventory with 6 weeks inventory available to prospective purchasers, 1 week less than last year’s figure. This was followed by Hawke’s Bay and Manawatu/Wanganui both with 8 weeks’ inventory.

“It’s surprising that total inventory is at its lowest position since records began, given some of the record prices being achieved around the country. Hopefully, we’ll see a little more momentum as we head towards summer and that purchasers will have more properties to choose from,” concludes Norwell. 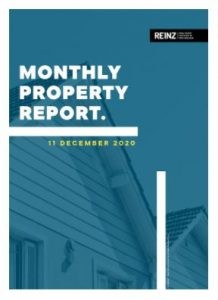 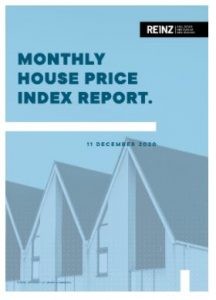 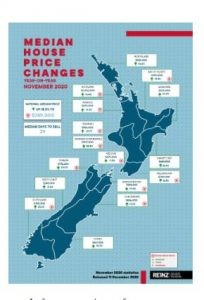