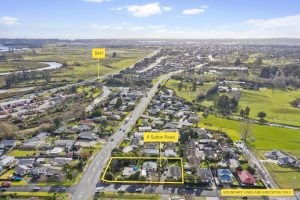 The big money being paid by developers and investors in South Auckland shows that lockdown hasn’t put the brakes on the city’s housing market.

In Drury, right on the southern boundary of Auckland, a sprawling 2646sqm section in the village sold for a record $4 million, while a rundown house on a nearly 1000sqm site in Papatoetoe fetched $2.28m and a home and income property in Romney Place, Manurewa, sold for $1.383m.

The properties were all bought sight unseen by the buyers, who outbid between six and 21 others in online auctions.

The sale of adjoining properties on Sutton Road in Drury, on the corner of Great South Road near the local primary school, for $4.07m – a whopping $2.85m over council valuation – shows developers are starting to look further south, said the Ray White agent who marketed the property, Adele Cooper.

She and colleague Manuela Isaac launched the property, which included a 1910 two-bedroom bungalow, a 1990’s three-bedroom dwelling, a sleep-out and a garage, just before lockdown but decided to move the auction from the end of August to this week. “There were seven registered bidders, and we reached a record sale price for Drury village,” said Cooper, who added that buyers did not seem to be aware of nor put off by Auckland Council’s proposed hike in development fees by $84,500 per home for new neighbourhoods being planned on the eastern and western edges by Oyster Capital, Fulton Hogan, Kiwi Property and Charles Ma’s Auranga.

“Interest is just starting here because Papakura and Manurewa prices have got so high. The buyer is still working on plans, but we’re starting to see the first two storeyed adjoined houses mixed suburban development go up in the village. People are amazed how much land commands in the area now.”