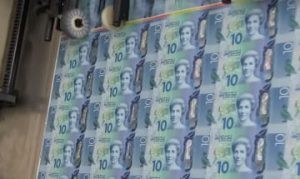 Money and the RBNZ printing presses – who wins?

Tony Alexander shines a light on exactly why the printing presses at the RBNZ are hard at work and shows us who benefits.

In this short article ” I show that most of the money “printed” by the Reserve Bank ends up right back with them again on overnight deposit. It never circulates. But still, because the printing of money involves buying bonds from investors, some of those investors will look to purchase other assets and while they might mainly look at shares, some individuals will look at residential property. Thus, money printing by the Reserve Bank will be adding to upward pressure on house prices, but the direct effect is likely to be extremely limited. “
“Because the printing of money by New Zealand’s central bank is a completely new thing, there is probably not quite the understanding of the process here that there is in other countries. The process of printing money involves the Reserve Bank buying government bonds being sold by private sector investors such as managed funds and individuals. They pay with a credit in the investor’s bank account and that is the money which is printed.
Why does the Reserve Bank do this? It is not to finance the government’s deficit. Treasury are already easily doing that by selling new bonds to investors eager for a safe asset. The RB bond buying is aimed almost exclusively at keeping medium to long-term interest rates lower than they would otherwise be.
In that regard their actions are a method of interest rate control just as changes in the official cash rate are. The official cash rate changes can easily cause changes in floating and short-term fixed rates. But the longer the term of the interest rate the less the influence by the Reserve Bank – hence the bond buying.
Will the money injected into investor bank accounts cause a surge in economic activity? Definitely not. The people and institutions selling the bonds to the Reserve Bank are investors simply swapping one asset for another. Had they wanted to raise money to spend on speed boats they could already have sold the bonds in the existing marketplace.
The cash injected into investors’ accounts will either be used to purchase other assets – such as shares and property – or it will remain in the bank accounts. In fact, whereas in February the “spare” cash which banks had on overnight deposit with the Reserve Bank was $16bn, it is now $43bn. Most of the printed money has gone right back out of the money system into a deposit with the Reserve Bank earning the banks 0.25%.”