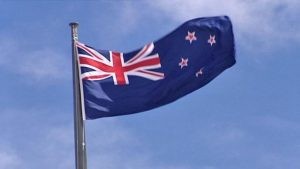 This week we received the monthly migration estimates from Statistics NZ. Using their modelling they estimate that the annual net migration flow for New Zealand has risen from a 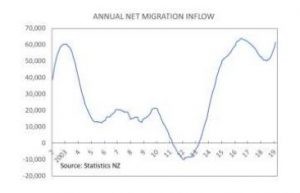 We can quibble about the accuracy of the numbers and note that revisions have been hefty in recent months and may easily continue to be so up and down in the future. However the underlying picture is one of a continuing firm boost to the NZ population from migration flows – equivalent to about 1.2%. This means continuing support for retail spending, growth in demand for financial services and housing demand. Hence one of a number of reasons why I struggle to buy into any particularly negative scenario for house prices in our main centres.

We also learnt that inward visitor numbers have become fairly static in recent months. In the year to February we received 3,877,813 visitors which was 2.7% more than a year ago. But this is the slowest rate of growth since the middle of 2013 and down slightly from the year to January total. In fact over the past three months in seasonally adjusted terms inward visitor numbers have fallen by 1.2% after rising 4.1% three months ago. Basically numbers have flattened out and that is probably a good thing in a sector which has struggled to keep up with the 41% boom in visitor numbers from five years ago. This period of flattening ahead of the Americas Cup and APEC in 2021 plus anticipated slight acceleration in global growth over 2020 will give sector participants time to train up staff, put better systems in place to handle numbers, and to construct sufficient accommodation.

Hopefully the pause will also encourage planners and marketers to do what they have said was their aim from decades back – targeting higher spending visitors rather than simply bulk numbers. However given that maximising numbers is the name of the game for the likes of Air New Zealand there is probably not much chance of that happening in any meaningful manner. More road congestion over summer beckons with visitors filling camping grounds previously available for Kiwis to holiday in. 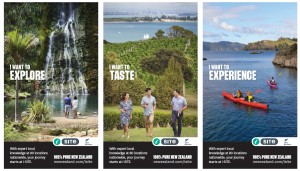 The best hope for anyone tired of all the travellers around the country is that the world embraces the need to take measures to limit the extent of global warming and people elect to holiday close to home rather than fairly much as far away as it is possible to travel for most. Of course this does then represent quite a risk for those in the tourism sector and a challenge to any who are claiming that the NZ tourism experience is good for the planet.

It’s the tourism paradox. By travelling thousands of miles to New Zealand to experience how clean and green we market ourselves as one is destroying nature through accelerating global warming.

Over a year ago I told conferences of residential real estate agents and mortgage brokers that they might want to think about pursuing an alternative career because annual dwelling sales looked like falling away to perhaps 65,000. They were at the time near 76,000, down from a peak this cycle of 95,000 early in 2016. But sales bottomed out near 74,000 not long after I spoke and rose to 76,500 late last year. It looks like I was about a year out because now sales are falling away anew and 65,000 once more lies in prospect. 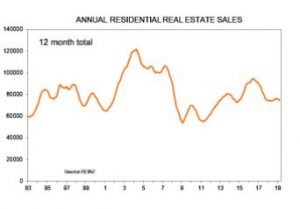 This following graph shows where we were a month ago. It shows the change in sales for each region in the February quarter from a year ago 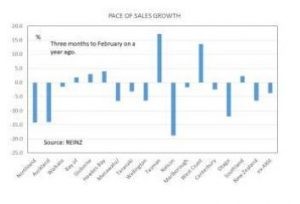 Now look what happens when we update the graph to March. 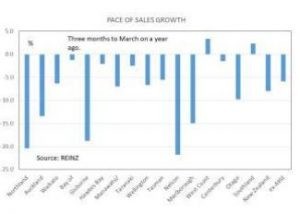 Sales are falling and further declines are virtually guaranteed now that fewer and fewer people feel any need to hurry and make a property purchase. What about prices? Looking at the REINZ’s House Price Indexes (which are the only price measures I pay attention to) we see that nationwide in March prices were ahead 2.3% from a year ago with Auckland down 2.9% and the rest of NZ up 7.2%. 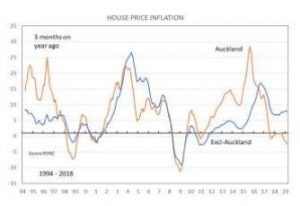 I like to look at three month averages to get a feel for how house price inflation is changing beneath the fluffery. This following graph compares the latest three month annual change with three months ago. We see the pace of price increase is slowing in Northland, Auckland, Waikato, Canterbury, and Otago. Elsewhere things however are still showing accelerating price rises 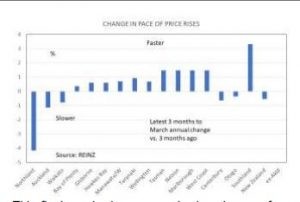 This final graph shows annual price changes for each region.

As this year progresses I expect to see prices slowly flatten out all around the country with the risk of some further mild downside in Auckland. After that, best guess is that things are flattish for 2 – 4 years with weak sales and people leaving the real estate and mortgage broking sectors, before a new cyclical upturn comes along. Why an eventual upturn? Because of continuing firm population growth set against insufficient construction.

Just for your guide, there are at least three new vehicles released recently into the market aimed at boosting demand for housing. 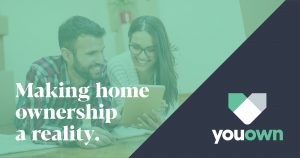 The BNZ Shared Ownership involves the bank partnering with company Youown who will help property buyers get enough deposit to achieve the 20% minimum.

But in February 40% of funds lent to first home buyers involved a deposit less than 20% of the purchase price and as banks have been at pains to point out, you don’t need a 20% deposit to buy a house. In fact there is no such rule if you are buying a newly constructed dwelling. So while some buyers will undoubtedly take advantage of the scheme it will probably attract the greatest uptake when fears return of prices moving out of reach of buyers so they want to purchase as soon as possible. In that way the scheme will help accentuate the mid-stage speed of house price appreciation in a rising market but not necessarily greatly affect market volumes or pricing during the static period which for instance Auckland is currently going through. 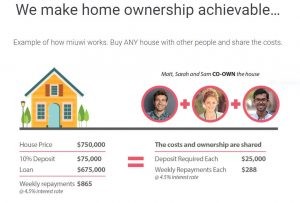 Miuwi is an online start-up launched in November which acts as a speed dating service for first home buyers who might be interested in co-ownership.

The Property Crowd is similar to another group buying business The Ownery. But they got a tad ahead of themselves in their launch this week in saying that investors could trade their shares on a secondary market – the Financial Markets Authority have not yet cleared that for them. Presumably they will however.

And two other things. First, there is no rush of investors to the exit door as promoters of imposts upon them have been hoping with their various moves underway now and from earlier years – removing depreciation allowances, ring fencing etc. If there were then listings would be much stronger around the country than they are now and sales would be stronger. 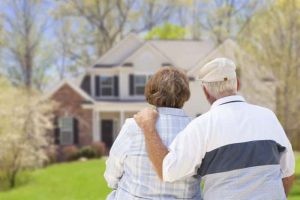 Second, and reinforcing the message just above regarding new vehicles for purchasing property helping to boost demand and support prices, retiring with a home. According to what we have all known for years and what University of Otago research has just confirmed, those who retire without owning a home are in far worse a position regarding weekly disposable income on the superannuation benefit than those who retire in home ownership. The message to people three decades ago from those proselytising woe and misery for retirees was raise savings in a general manner. The new message remains one of boosting saving but also making sure to buy a house along the way as well.

Oh, and as regards the apparent construction industry accord announced by the Prime Minister wearing a hat a few days ago – great words worthy of skilled PR advisors. But it is hard to imagine anything meaningful in the short-term. Simply saying that there is agreement problems exist and that meetings will be held to formulate plans for dealing with problems means nothing as anyone with experience of corporates, central government, local government or NGOs could attest. The desire to speed up consent processing sounds good – just as every comment over the past 20 years along the same lines has sounded good – to no real world effect. What is concerning however is that the accord participants seemed quite open about accepting new regulations for the construction sector. Tighter regulations may go some way toward improving quality which seems unusually low in the NZ construction sector. But it will involve higher costs – thus providing extra support for house prices over the long term. 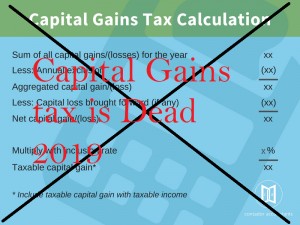 This afternoon, whilst not wearing a hat, the PM announced that a capital gains tax regime is dead in the water. Maybe working in a fish and chip shop sprinkling salt really did give our leader good insights into the concerns of businesspeople!

Removal of the CGT worry on the face of it will have a positive impact on the housing market. But given our belief that few people were going to sell anyway and most would simply extend their time period for holding a property whilst focussing more on cash flows by raising rents, the market impact will be very minimal.

I’ve been preaching a story of downside risk to interest rates for quite some time and this morning we got further confirmation that inflation is an old ghost of little real world menace in New Zealand these days. The markets expected that Statistics NZ would announce a 0.3% rise in the CPI for the March quarter.

But the result was only 0.1% – same as in the December quarter. The annual rate has now fallen to 1.5% from 1.9% last quarter but is up from 1.1% a year ago. The underlying measure I like to track which excludes food and household energy rose just 0.3% in the quarter after rising 0.6% in the December quarter, leaving the annual rate unchanged at 1.5%.