The OECD and IMF have both in the past week made comments regarding the state of and prospects for the NZ economy and there was nothing vastly different from what we are seeing and saying, and nothing likely to cause the government to alter its policy direction.

Similarly, yesterday when reviewing the 1.5% official cash rate and leaving it unchanged, the Reserve Bank said nothing surprising. They see that growth has slowed and because there are downside growth risks, they indicated they may need to cut the cash rate again. A 0.25% reduction in August is our pick.

Will rate cuts make much difference to our economy’s trajectory? Not really. Businesses are more concerned about the government’s competence and policy direction, capital and debt funding availability, margin management, supply chain changes, and sourcing labour, than the cost of debt. The Reserve Bank are really just doing what they have been doing since the 1980s but frankly it doesn’t count for much in a world where inflation remains persistently low and official interest rates are settling globally at close to zero levels.

They need to turn their attention to other things to keep their staff active – and they are. Prudential management has come to the fore and as we wrote here some years back, we are shifting away from a world where credit is rationed on the basis of price and bank risk assessment toward a far greater role for credit controls (LVRs and new home lending levers), and a far greater emphasis on strengthening banking and financial systems to better handle the next financial crisis.

We have lived through a period from the mid1980s of generous credit availability but with bouts of tightening credit risk assessment. The first big tightening for NZ banks came in the years immediately after the 1987 sharemarket crash. The next big tightening has been underway for the past decade and more will come.

We have lived through a banking/credit super cycle and that cycle ended a decade ago. It isn’t coming back and that means businesses in particular will need to think more in terms of financing growth through retained earnings and capital injections than has been the case for three decades.

This does not mean miserly lending policies from the banks. It simply means a continuation of the slow tightening up of lending conditions underway for the past decade, assisted by things such as proposed potential new bank capital levels, potential greater scrutiny and accountability for bank boards and senior management, and pullbacks from staff remuneration schemes based partly upon volume lending growth.

A couple of months ago I analysed CoreLogic data to get some insight into the importance of first home buyers in 72 locations around New Zealand and changes in FHB presence from three years ago. I showed that FHBs are very big players in Auckland’s Waitakere (36%) and Papakura (38%) districts, plus Porirua (36%) and the Hutt Valley (near 34%). In contrast there are very few FHBs in Thames-Coromandel (8% average the past year), Kaikoura (13%), Taupo (14%) and so on.

I mentioned that I would eventually look at the numbers from the investor viewpoint and have finally found the time to do so this week. The first set of three graphs below shows for each location the proportion of title transfers over the year to May which were accounted for by multiple property owners.

In the Mackenzie District in the year to May 53% of titles transferred went to investors/second+ home buyers. Kaikoura was next at 52%. At the other end of the spectrum we have only 23% of title transfers to investors in Carterton, same for Stratford, and 25% for Waimakariri. 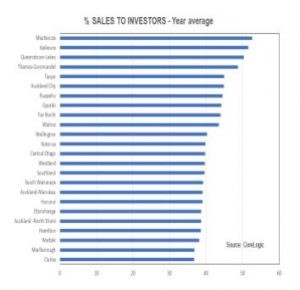 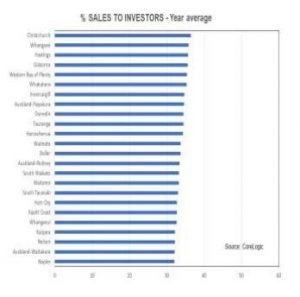 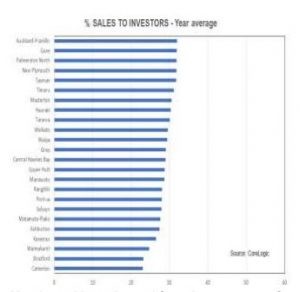 How have things changed from three years ago? Where have investors backed off the most? Our graphs run the other way so the first thing we see below is a grouping of locations where compared with three years ago a higher proportion of sales are now going to multiple property owners. Top of this group is Opotiki with a 7% rise followed by Kaikoura with a gain of 6%, then Queenstown at 6%. You cannot make the case that the LVR requirements have pushed investors out of Queenstown. More investors have gone into Wanganui. 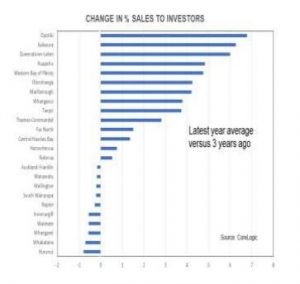 However, investors have been pushed out in the Grey District on the West Coast by about 12%, followed by Stratford then Selwyn. 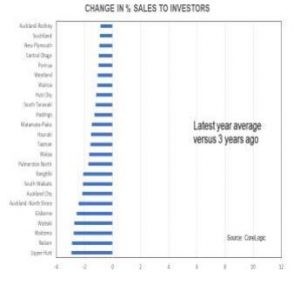 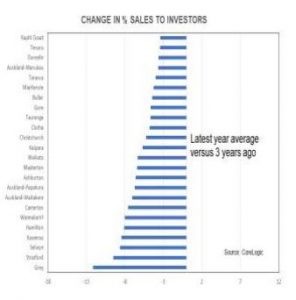 Regarding Auckland note that there is little change for Franklin and Rodney. Auckland City and North Shore are down just over 2% points which is not much really. But note the decline in investors of close to 8% in both Waitakere and Papakura.

There are a lot of data points in the six graphs which cover 72 locations. So, your best use of them may be as a tool for gaining insight into how things have changed in a location which you are interested in finding out more about. Enjoy.

I have refined my calculations regarding how much the NZ housing shortage may have grown in recent years starting with Statistics NZ quarterly population estimates. They show resident population growth of 458,000 between March 2014 and March this year. SNZ also estimate dwelling numbers quarterly, and in this five-year period they rose by 126,000.

I’ve always intended that this question revolve entirely around the issue of interest rates – current levels, differences between fixed rates for different terms, and where rates might be headed. But there is another factor to consider and it revolves around the key problem facing young buyers these days – scraping a deposit together.

Young buyers face the extremely positive development of interest rates back at 1960s levels as opposed to the 18.5% I paid in 1987 and the higher rates many others paid. But they face two negatives.

The first is the level of house prices which as I have been at pains to point out, not so much from late-2008 but mainly from 2011, have permanently jumped upward because of permanent changes covered many times here. Structurally lower interest rates are a big factor along with a trend change in net migration flows, but there are plenty of others I might get around to running through again in a few weeks’ time.

The other big factor is getting a deposit together. Although around 45% of first home buyers make their purchase with less than a 20% deposit the basic rule of thumb is that you need to come up with 20% or very close to it before purchasing.

Pre-GFC you could purchase with a tiny deposit, and even back in 1987 I made my purchase by running up debt on four credit cards and calling that my deposit.

But these days, getting the deposit together is a problem – and so we see the articles regarding young people having to rely on parents to give them a hand up. Plenty of people did that back in the day, but there is the new issue now of the loan to value (LVR) requirements which is something I want to make a comment about.

I have the view that come the next six-monthly Financial Stability Report in November the Reserve Bank will cut the 30% minimum deposit for investors to 25% and the 20% for owner occupiers to 15%.

Which brings me back to thoughts about what I would do as a borrower struggling to get a deposit together. I would still be in the market perusing property. I would not do nothing simply because I currently might have no hope of getting a 20% deposit together. I would want to know the range of properties on offer, their problems, their fix-it-up opportunities, and their proximity to things which might matter to me like church, train, or KFC.

Basically, were I a young buyer again I would be actively going to open homes and sitting in on auctions. And I’d probably be getting offers from agents to keep an eye out for a property which might meet my needs.

Power now lies with young potential buyers in the residential property market in Auckland, and perhaps 12-18 months from now in many other parts of the country once they complete their equilibrium price adjustments. This is the market state which young buyers have been hoping for since they scurried back into the market with every man and his dog in 2012. And if and when I believe the 20% minimum deposit requirement gets cut to 15%, those who have done their work will be well positioned to secure a home.

But if you are a young, desperate home seeker, watch out for the following. Beware of leasehold property because ground rent changes can destroy your equity. And watch for “deals” in locations of seismic and inundation risk. The latter is something new which will drastically affect prices of properties at risk, cutting their values – as has happened with leasehold properties in Auckland. Watch for vendors being willing to leave some money in the deal, maybe even to finance a large part of your deposit. They are looking to offload their risky asset and minimise the losses which someone will inevitably bear once markets fully price the risks associated with inundation-risk properties.