Things have started heading in the less stellar growth direction in recent times. NZ business confidence sits at levels almost as bad as during the GFC.  Consumer confidence measured by the ANZ Roy Morgan survey has fallen to 116.4 from 122.6 in June. The ten-year average is 120.

Most concerningly, offshore the degree of trade tension between the United States and China has ramped up substantially this past week. The US President has imposed a 10% tariff on the remaining US$300bn worth of imports not already hit with 25% tariffs, effective from September 1. The Chinese have retaliated by halting imports of US agricultural products and allowing their currency to decline against the greenback. This decline is not a devaluation because the Chinese have been intervening for a long time to hold the Yuan up. They simply stood back for a bit to let market forces come into play – market forces which Chinese people are well aware of with regard to direction and help explain why Chinese mainlanders are so keen to get their funds offshore and away from their increasingly authoritarian dictatorship.

We don’t know where this will end and over what time frame things will develop. But equity markets have sold off in response to the trade war – though they have for some time looked due for a decent correction following strong price rises in the context of a deteriorating global growth outlook.

Locally, we can expect that if things get worse before they get better offshore then the NZ dollar will probably decline against most currencies as investors adopt more risk-averse asset positions. However, for a while we rose against the Australian currency this week to near 96.5 cents and this was because Australia’s exports and economy are heavily exposed to China’s economy and it is hard to expect anything else than that China’s highly indebted government directed economy will suffer as the trade war deepens. Throw in the possibility of Chinese police or soldiers suppressing deepening unrest in Hong Kong and things might get ugly.

We simply don’t know – which is why we see prices for risky assets falling.

Do the labour market numbers released on Tuesday add anything into the picture of where our economy is headed? Some people got quite excited because the unemployment rate dipped to 3.9% from 4.2% and job numbers grew by a stronger than expected 0.8%. 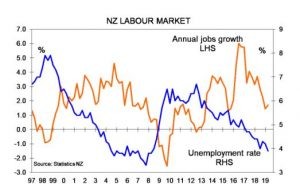 The labour market is still in good shape and probably if more people were available jobs growth would in fact be stronger. But we need to note that the 0.8% jobs growth during the June quarter followed a 0.1% decline in the March quarter and 0% movement in the December quarter. The underlying pace of jobs growth is probably closer to 1% than the 1.7% June on June quarter change. This is quite a slowdown from rates of growth of 3.7% one year back, 3.3% two years ago, 4.5% three years ago, and 2.9% four years back in the year to June 2015.

This slowdown means less overall growth in household incomes and that means it is reasonable to expect slower growth in retail spending. That in turn means that more retail closures are likely as slower spending growth piles on top of the massive changes sweeping through the retailing sector already with new entrants and growing online competition

In the ANZ Business Outlook survey released last week a net 6% of respondents said that they plan cutting staff numbers over the coming year. This poor result was driven by a net 33% of businesses in the construction sector saying they plan cutbacks. This seems somewhat incongruous given the high level of construction activity. But it may simply reflect business plans to scale back to more sustainable and manageable business sizes in the context of extremely challenging operating conditions.

Whatever, the days of very fast jobs growth ended late in 2018 in lagged response to the fast pace of growth in the economy falling away from early that year.

What about wages growth? Is it accelerating? Technically-speaking yes. The measure I look at which tracks an unchanging mix of jobs lifted to show an annual rate of change of 3.6% in the June quarter from a rate of 3.3% since the middle of 2017. However, it is likely that the lift in wages growth simply reflects the legislated increases in the minimum wage rate rather than a generalised accelerating increase for most employees.

Given the global concerns, the below 2% inflation, the very weak business sentiment, plus below average consumer confidence, that yesterday the Reserve Bank cut their official cash rate from 1.50%. But they surprised us all by cutting 0.5% to just 1.0% rather than 0.25%. Why the 0.5% cut? The RB seem determined to try and get ahead of the curve – a curve which is pointing toward slightly slower growth and inflation falling back even further from the 2% mid-point of the 1% – 3% target range. More on this below.

Barfoot and Thompson released their data for Auckland this week and there was nothing of interest to myself there. In rough seasonally adjusted terms sales rose 13% in the month and 9% over the past three months. So, sales are very slightly drifting upward. Prices are completely static, sitting 1% ahead of a year ago and unchanged over the past three months. The stock of listings remains low at 3,864 which is down 6% from a year ago. New listings were 9% higher than in July last year, but for the three months to July they were down 10% from a year back and that smoothed measure gives a better feel. 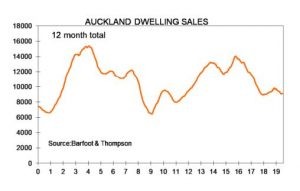 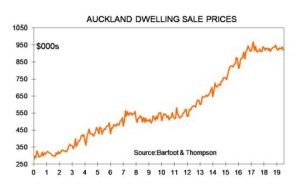 Agents continue to struggle to get listings in an environment where very, very few people are under pressure to sell. They are not being stressed by mortgage interest rates, the labour market remains okay, and few people, bar those who have been wrong for a decade, are of the view that prices are going to fall away to any worrying degree.

But we need to ask ourselves the question. With mortgage interest rates now falling a bit further, will the Auckland housing market reignite? After all, Sydney and Melbourne are now moving higher.

With regard to Australian cities, their housing markets have been boosted by the fact prices have already declined 10% – 15% so buyers are being encouraged back in. But banks have recently eased their lending criteria, and the rates which get used to assess debt servicing ability have been reduced from close to 7.25% to around 5.5%. Debt is now available to more people.

With regard to Auckland, momentum for the moment is probably still downward. We have to remember that while low inflation is one factor driving easier monetary policy, so is continued low wages growth and slowing jobs growth. But that downward momentum may change back to a simple flattening out late this year if as we suspect the RB again eases the LVR rules and banks by then lower their serviceability test interest rates. Unlike Australia, those rates are actually set by the banks themselves in NZ, not by the Reserve Bank.

But my feeling regarding a new cyclical upturn timing is still for 2021-22. Before then the regions will flatten out. But keep an eye in Christchurch. There is a catch up to come.

The pressure for mortgage interest rates remains fairly firmly downward. Worries about the world economy continue to grow as Brexit approaches with a hard exit from the UK increasingly likely, trade tensions escalating between the United States and China, ship seizures in the Persian Gulf, new tension between India and Pakistan over Kashmir, nuclear weapons development and missile positioning threats from Russia, and North Korea test-launching missiles again. Not to mention the increasing unrest in Hong Kong which could elicit a brutal crackdown as happened in Tiananmen Square in June 1989.

Responding to the wave of growth concerning factors in recent days the Reserve Bank cut their cash rate 0.5% to 1.0%. A further cut to 0.75% cannot be ruled out for November. Holding steady in the September review seems the most likely step at this stage. Could they take rates even lower than this, and possibly go negative? The RB Governor said yes. So, for savers the outlook has just got worse. 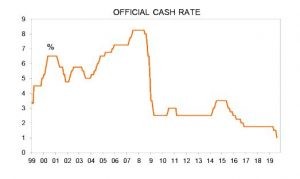 This encourages me to mention something I have discussed lightly in the past. There will now be a heck of a lot of older, unsophisticated, people who will not be happy with the returns they can get on simple bank deposits and they will be looking for higher yielding places to put their retirement funds. History tells us that when interest rates take structural steps down these people can find themselves investing in things which they do not understand and which are riskier than they should really be involved with. 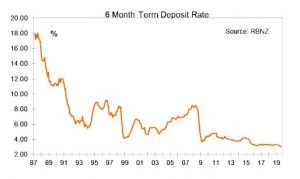 If you have an older friend or relative who is expressing disappointment about their interest rates and talking about shifting their funds elsewhere, please encourage them to see a financial advisor. The message needs to get through to them that the only way they can get higher yield is with higher risk.

Back on borrowing rates now, the US ten year government bond yield has fallen to 1.64% from 2.04% last week and 2.5% three months back when things were looking rosier. Their 30 year rate in fact is almost back to the record low set two years ago just above 2%.

The swap rate which forms the basis upon which bits and pieces of other costs and margins are added to get the cost of funds for three-year fixed rate mortgage lending in NZ has decreased to just 1.04% from 1.27% last week, 1.37% two weeks back, and 1.7% three months ago. From three months back the actual three-year fixed mortgage rate has risen from 3.95% to 4.05%. But following yesterday’s 0.5% OCR cut the two-year fixed home loan rate has been cut to 3.75% from 3.79%. Welcome to a world where the ability of the Reserve Bank to influence mortgage interest rates with the OCR is greatly diminished. 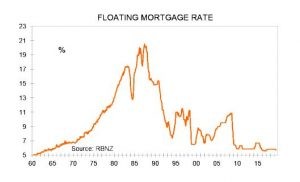 If I were borrowing at the moment, I would be inclined to hold off fixing for the moment. I can’t help feeling that one of the main lenders will introduce an aggressive fixed rate given the way that the margin over swap rates has blown out recently – though calculating the true cost of funds to banks is no longer easy. Note for instance the comment by ASB yesterday that they have had to hire an extra 100 people to work in the compliance and risk areas and will hire more. Costs of running a bank are going up and with more regulations certain to come more such costs will occur.

Note also that term deposit rates probably won’t fall to the same extent as the OCR because banks have to have big domestic term funding bases. If depositors start shifting funds from term to call because there is not much rate sacrifice but they gain flexibility, then banks will have a big problem meeting RB liquidity requirements.